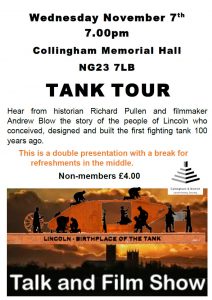 The Land Ships of Lincoln

On the 7th of November the Society launched its programme marking the anniversary of the Armistice in 1918, with the story of Lincoln’s role in creating the first military tanks.

A record number of members and visitors came to the Memorial Hall to hear military historian Richard Pullen and filmmaker Andrew Blow recreate the story of the ‘Land ships of Lincoln’ and how  the development of these military tanks became a major factor in saving lives in the latter half of the war.

Richard Pullen became interested in the tanks because his grandfather worked at William Foster and Co. of Lincoln from 1916. Fosters (with the help of Major Walter Wilson) were inventors and manufacturers of the world’s first tanks. Andrew Blow’s interest came from the discovery of rare 1918 film of the tanks taken on the Lincoln testing ground.

The lecture and film show brought in to focus the importance of the tank in WW1. By 1915 stalemate had been reached – the war was unwinnable because of the superior numbers of the enemy’s machine guns and because of the huge areas of barbed wire – sometimes six to eight feet high. The fundamental need was to have something heavy enough to crush the barbed wire and the invention of the tank meant there was now a way of crossing broken ground without enormous numbers of fatalities and injuries. 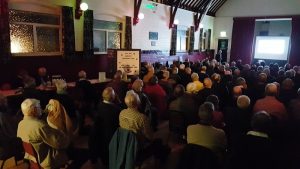 Numerous rare images used in the lecture showed the evolution of tank designs over the early years of the war – ranging from the fantastic to the downright weird. The problems were gradually ironed out until 1917 when the Mark 4 was built – the first real battle ready tank.

The film show and lecture ended with recognition of all the ‘munitionettes’;  the women who stepped up to the plate and built these tanks, taking the place of their men folk who had gone off to war.