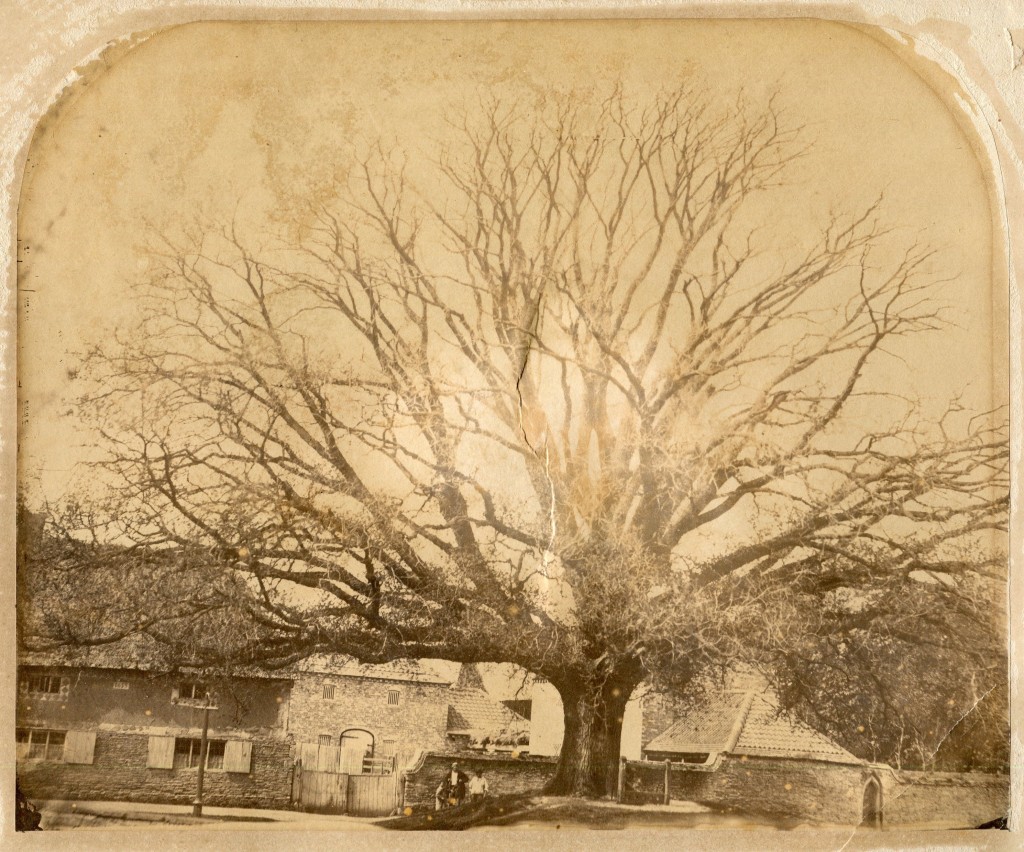 The Stocks Hill Elm on the Green, South Collingham, was planted to commemorate the defeat of the Jacobite forces at the Battle of Culloden in 1746. All the farm buildings behind (linked to the Manor and Westfield House) have since been demolished.  To the right of the tree, the original wooden stocks can be clearly seen. The tree was cut down in 1986 and replaced by an oak. 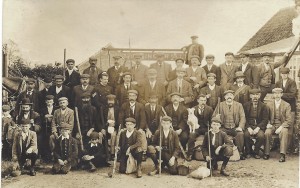 Members of the Collingham Angling Association gather ahead of a fishing match c 1905. To the right of the man with the white dog  is Gervase Bradwell, who was the landlord of the Grey Horse at the time.

image from a postcard in the archives. 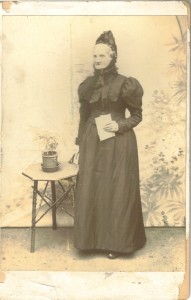 Mrs Louisa Western (1831 – 1909) ran the post office-cum-‘fancy repository’ in Collingham from 1881-1908, possibly taking over the business from her husband, William Western, who was listed as ‘hairdresser, newsagent, post office’ in trade directories between1869-1879. The business was originally in one corner of what is now Gascoigne’s Newsagent’s on 103 High Street. 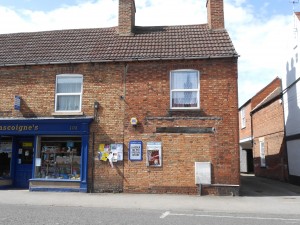 103 High Street, Collingham The original post office window, now bricked-up, can still be seen. The small shop was a hairdresser’s well up to the 1940s, Frank Harker being the last barber mentioned in 1941 trade directories 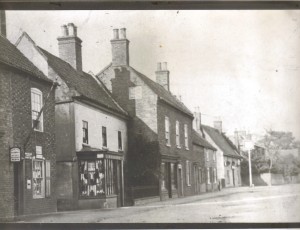 103 High Street c 1910 (with barber’s pole). Holland’s drapery and grocery shop is to the right and Wm. Bailey’s baker’s and confectioner’s was what is now CJ’s Hairdresser’s. The White Hart is seen in the distance.

By all accounts Louisa Western was a striking presence in the village. Collingham resident Miss Clara Clark (1890-1983), writing in 1961, describes her as follows:

‘She was a real character. Day in and day out, month in and month out, our post mistress was arranged in a long black skirt down to the ground, black blouse, over which was worn a cape or cloak, a black bonnet, over which was worn a coarse veil. The whole costume was completed with black mittens. This lady delivered letters on foot; never used six words if one would do. Her appearance was enough to frighten one if you were not accustomed to her odd looks. She had a heart of gold really and had even been known to give us a gingerbread.’

Miss Clark paints a wonderful picture of the post office, too. ‘There was a small shop window, which was crowded with all sorts of interesting things, from soft balls on elastic, wooden dolls with painted cheeks, penny dolls with pot heads, bags of beads, boxes of slate pencils etc. Inside the gloom there were bottles of sweets, humbugs eight a penny, bars of plain and cream chocolate and a bottle of gingerbread biscuits.’

Source: Extracted from notes given by Clara Clarke to Collingham’s Women’s Fellowship in 1961. A condensed version can be found in June 1990’s ‘Fleet’ (both copies in the archives EC/Fleet and EF/V1. 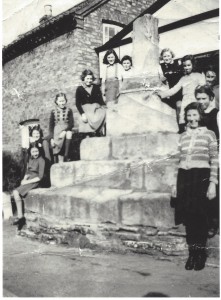 The Cross, High Street, North Collingham 1945. Note the cross is in its original location on the east side of the High Street, in front of what was then Arthur Brewster’s, cycle agent’s and petrol station (see picture below). The cross is sometimes referred to as a butter (market) cross although there is not thought to be any evidence of a medieval market.

Photograph kindly donated to the archives by Mrs Marion Woodcock (née Crocker, top right of the stump). Marion believes the event was a school outing and that the photograph was taken by their teacher (either Miss Davy or Miss Croft). 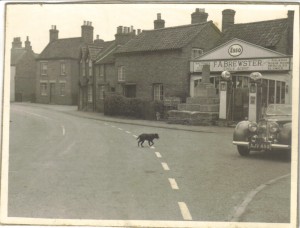 The Cross c 1950 with the cross in front of the petrol station. A few doors to the left of the picture is 158 High Street ‘Crown House’, formerly called the Crown Inn (below) 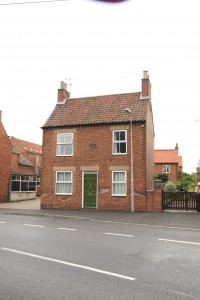 The Crown Inn was not referred to as a public house in trade directories but as a ‘beer house’. Occupants such as Henry Holmes (1895) were called ‘beer retailers’ rather than publicans. There are no references after 1912, when a Robert Price was listed as the beer retailer.

The Charge of the Light Brigade 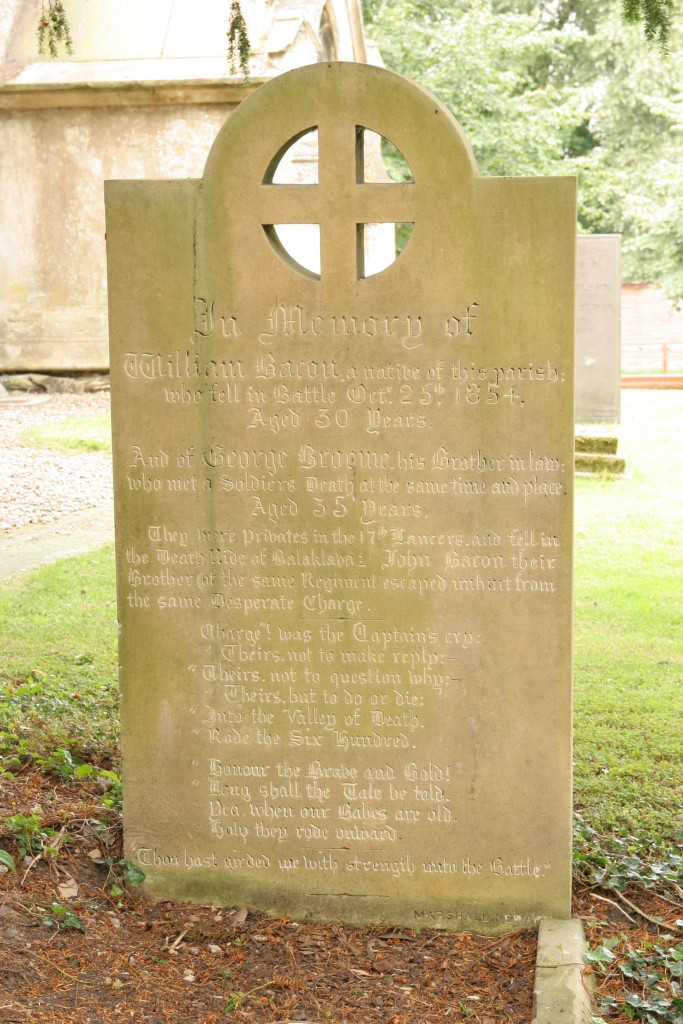 William Bacon and George Broome’s headstone in All Saints’ Churchyard. William Bacon was a private with the 17th Lancers and was killed in The Battle of Balaclava 1854, alongside George Broome, his brother-in-law. Two further members of the Bacon Family – John William (Jack) and his brother Thomas, would later perish in the First World War. 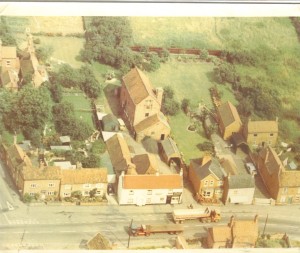 Aerial view of North Collingham showing the junction with Woodhill Road c 1964. The white building is now ‘One Stop’ convenience store and was then L. Day’s Bakery. The original corn mill can be clearly seen to the rear of the property. This has now been converted into flats. 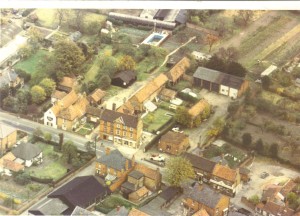 Aerial view of South Collingham c 1964 The central three storey building is The Red House with extensive outbuildings to the rear. No. 17 High Street opposite (on Lunn Lane) were Harold Healey’s Motor Repairs and Garage. The King’s Head on the right of the picture is shown with white painted markings along the first floor coursing. 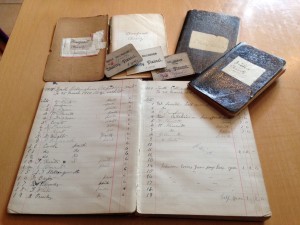 Prior to the Welfare State, the poor relied on various charities to help them subsist. Collingham had several such charities, going back as far as William Hart’s of 1699. The photograph shows a few of the original tokens (for flannel and coal) and account books in the archives (URL PC/QQ). The founders of these charities dictated to whom the relief was given. William  Lonsdal (or Lansdale – spellings vary)  d.1810, for example,  ‘left , by his will, £10 the interest of which he desired to be given annually to ten poor men of this parish.’ 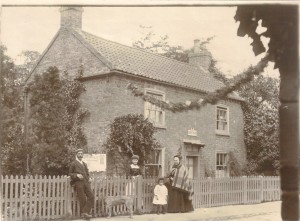 Image from a photograph in the archives (URL: EF/V1) 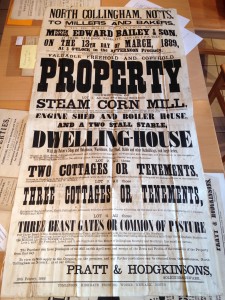 The history society has several auction notices in the archives. Many are in a fragile condition but they can yield a great deal of important information. This one from 1889 refers to the steam mill mentioned in the aerial view of N Collingham 1964. Details on the poster include names of the vendors, names of the neighbouring tenants as well as the size and description of the properties and land being auctioned. Many of the auctions took place in the Royal Oak public house. 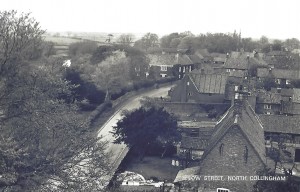 The view over the rooftops on Low Street shows the bend in the road following the sweep of the River Fleet just visible on the left. The large ivy-covered house on the left of the bend is The Willows. The stone gable end on the bottom right of the picture is part of Grange Farm. Grange farm possibly once housed the tythe grain due to All Saints’ Church.

Postcard kindly donated to the archives by Mrs J Pipes 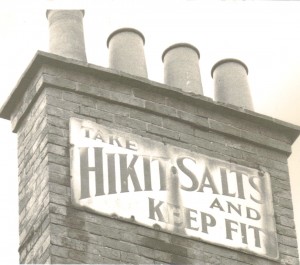 This yellow and black enamel sign adorned the chimney stack of 81 High Street from the 1930s, when it was a chemist’s shop, to around the 1980s when the building was converted to flats. Invented by chemist Mr Jones, the celery-based salts were supposedly good for rheumatism. Sadly not everyone seemed as enamoured with them as Mr Jones hoped and vast quantities were taken to Farndon tip by Mr Painter, his successor.

By all accounts Mr Jones (first name unknown) sounds an interesting character. Those who recalled him described him as ‘a voluble talker who embraced the the ‘true religion’ (Spiritualism). He was interested in music and bought a grand piano on which he learned to play Beethoven’s Sonatas. He later qualified as a doctor and specialised in pathology for the Home Office.’

Collingham archives is fortunate to have a tin and box of Hikit Salts, as well as the original enamel sign in its collection. Coincidentally  none of the archive team has complained, so far, of rheumatism!