A World War One commemorative plaque dedicated to John William Bacon and found in a coal shed in Low Street, has been reunited with the Bacon family.

22-year old ‘Jack’ Bacon, a Lance Corporal in the 11th Battalion King’s Royal Rifle Corps, was killed in action on the Somme on September 3rd 1916. Before enlisting he had lived with his widowed mother, Mary Ann, and his siblings in part of the house now called ‘Cleave Cottage’, owned by Mr and Mrs C Allen.

After finding the slightly damaged bronze plaque in his coal shed, which was formerly the pig sty, Mr Allen put a notice in Fleet magazine and descendants of Jack’s family came forward. 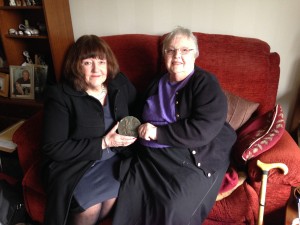